An announcement by Boeing that the delivery of its first KC-46 air refueling tanker to the Air Force will be delayed half a year also means a delay in training at Altus Air Force base in southwest Oklahoma.

Boeing blamed the delay on issues related to qualification and certification of the plane’s centerline drogue and wing-aerial refueling pod systems. The company now expects the first KC-46 delivery to be in August 2017 instead of March.

Boeing originally was slated to deliver 18 of the completed tankers by August 2017 but now the completion will not occur until January 2018, according to a report in the Wichita Eagle.

The McConnell Air Force Base in Wichita is the first active-duty-led base in the U.S. to fly missions with the tankers and the Peace Air National Guard base in New Hampshire will be the first Air Guard base to fly the planes.

Altus Air Force base will be the formal training unit for the KC-46. 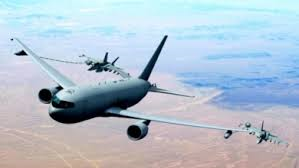