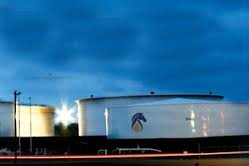 The $13.6 million was before interest, taxes, deprecation and amortization.

The cash flow was $8.6 million for the three months that ended March 31, 2016 compared to $11 million a year earlier. The company said its distributable cash flow for the 2015 first quarter cash flow included $2.3 million of cash proceeds related to the sale of common units received in connection with the settlement of a 2008 claim with a previously related entity.