Oil Hits $46 a Barrel for First Time Since November 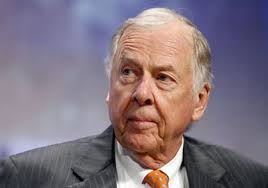 Speaking at a dinner hosted by the Committee to Unleash Prosperity, Pickens that he doesn’t expect U.S. drilling operations to pick up again any time soon after OPEC failed to reach a production deal earlier this month, according to the Washington Post.

“The industry is dead in the water,” Pickens told the group.

The Oklahoma native said that he believes crude prices will have to climb back to at least the $60 per barrel mark before upstreams start spinning their drills again.

“It’ll be hard to start the United States back up,” said Pickens.

Pickens revealed in an interview earlier this year that he has exited all of his oil holdings and will wait to jump back into the sector.

Since 1980, Pickens has watched oil prices plunge five times worldwide. Four of those times, he said, Saudi Arabia stepped in to cut its oil production, balance the market and bring prices up again. The fifth time — this time — the Saudis kept pumping away, prices stayed low, and American companies let their drilling grind to a near-stop. Pickens doesn’t expect them to resume anytime soon, even if prices come up a bit.

They pressed Pickens on how high prices would need to rise to bring U.S. oil rigs back online en masse; he said higher than $40 or $50 a barrel — probably closer to $60.

They asked whether presidential candidates should be promising to open more public land to drilling. “No, hell no,” he said, “we don’t need public land.”

Pickens shrugged off questions about the validity of science that shows fossil fuel emissions are warming the planet, which he has embraced, though he criticized environmentalists for attempting to stop fracking for natural gas.

Although Pickens wasn’t optimistic about a near-term drilling recovery, it wasn’t all doom and gloom for the energy investor.

Pickens told the group that he believes the rest of the U.S. economy is benefiting from cheap gasoline prices brought about by the global oil glut.

“I think we got a pretty good economy,” said Pickens. “It’s horrible for the oil business, but the rest of America is there doing great off … $2 a gallon gasoline.”