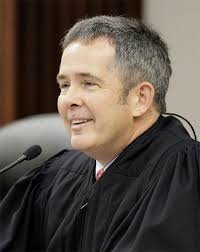 Tulsa Federal Judge Gregory Frizzell has tossed a legal challenge filed against the merger of the Williams Companies, Inc. and Energy Transfer Equity of Dallas, Texas.

The judge ruled against John Bumgarner, a Williams company retiree who was a senior vice president of planning and development for the company. He contended that statements made at the time of the announced merger last fall were “misrepresentations.”

His lawsuit filed earlier this year contended there were eight statements or omissions including a claim that the merger was not expected to impact Williams’s credit rating.

In his ruling, Judge Frizzell noted that Williams Companies and ETE argument their statements fell under a safe harbor for forward-looking statements. He also said their argument was “persuasive” and that the Nov. 4, 2015 press release “was a public statement to which Williams’ shareholders have access.”

“None of the statements or omissions referenced in the Amended Complaint as being false or misleading can support a claim for a violation,” ruled the judge. But he quickly added, ‘In no way should this order be taken as approval or disapproval of the proposed merger, or of the wisdom of acceptance or rejection by the shareholders.”