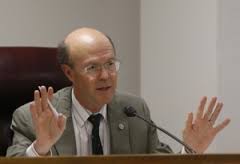 The Oklahoma Corporation Commission’s controversial decision allowing OG&E to install a $500,000 scrubber on its coal-fired Sooner Power Plant at Red Rock is being called a “catastrophe” by critics and a forced decision by “Big Brother” by one commissioner.

It took only 8 minutes for the Commission to meet and make the decision, one defended by Commission Chairman Bob Anthony.

“In my opinion, the Commission Order will result in OG&E going forward with scrubbers at the Sooner Plant,” said Anthony. “Furthermore, the Order promotes fuel diversity and power reliability while giving assurance to investors.”

In a later interview with OK Energy Today, Anthony explained the federal government’s environmental restrictions, rules and requirements mean the state will have to put expensive scrubbers on coal plants.

“That’s what we’re doing. We cannot afford to totally abandon coal in the state of Oklahoma,” he added. “The company, for the $500 million project has already spent $130 million. If we pull the plug on it today, somebody’s gonna have to cover the $130 million of wasted investment.”

Commissioner Todd Hiett joined him in approving the scrubber while Commissioner Dana Murphy complained the case was the result of the federal EPA “forcing a public utility in Oklahoma to make costly changes to comply with a federal plan imposed on Oklahoma for regional haze.”

“Once again,” said Murphy in a statement after the meeting, “Oklahomans find themselves squeezed by Big Brother as a result of a questionable federal mandate.”

However, she also said OG&E’s request and the Commission’s granting of that request are consistent with meeting what the federal law requires.

“Oklahoma should not depend on other states for diverse power generation sources. OG&E customers have already made a huge investment in the Sooner Plant. It would not be wise to lose that dependable resource or the insurance it provides.”

Listen to how the decision was made in the 8-minute meeting.